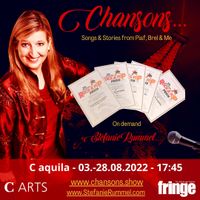 Come see Chansons and live life the French way. Listen to stories and songs from Edith Piaf and Jacques Brel, and French music that has travelled the world, in this charming musical theatre cabaret show. Hear autobiographical stories about France and immerse yourself in French culture. The journey goes from love, to war and freedom, from childhood memories to French food; all to the soundtrack of stylistically diverse French music. Chansons lets you travel through a compilation of real-life experiences and memories, featuring stories of the nuances of life. The French songs, or ‘chansons’, support these stories and deepen those thoughts and experiences. Chansons includes songs in French and English, and can be enjoyed whether or not you speak French. The themes of the French songs and stories are explained in English. You may be familiar with many! Learn more about the ‘savoir vivre’ in an original cabaret which reflects our lives and illuminates philosophies of living. This extraordinarily charming show is written, sung and performed by Stefanie Rummel, accompanied by pianists such as: Vignir Stefánsson (Iceland), Andreas Sommer (Germany), Bobgan Pielanu (Romania), Tom Schlueter (Germany), and Bob Egan (US). Experience passionately performed music that is sure to touch hearts, with its combination of charm and authenticity. Multi-award-winning Stefanie Rummel has performed in France, Finland, Germany, Iceland, Luxembourg, Norway, the UK and the US, amongst others. Her shows are presented in English, French or German. Stefanie Rummel performed in the Musical Nunsense for eleven years, and has also performed in Kiss me Kate, Sweet Charity and Jesus Christ Superstar. Her one-woman-shows and musical cabarets are booked by cruise ships, variety shows, special events and theatres. Rummel has performed Chansons live in Germany (Haus Burggarten, Gallus Theater) and at the Reykjavik Fringe Festival (Iceland), and digitally at the Edinburgh Fringe, Living Record Festival, Lathi Fringe, Solo Art Heals from MarshStream (San Francisco), Bob Egan’s Virtual Piano Bar (US) and the Theatermakers Summit Cabaret (New York). Chansons was recently been nominated for Producer of the Year and Choice Theatermaker awards from Tony award-winner Ken Davenport in New York, and in December 2021 won five awards in Germany, including first place for Best Chansons, second place for Best Music Video and Best Composer, and third place for Best Folk Song and Best Musical Theatre Song. ‘Rummel’s voice is outstanding: it moves from delicate, lingering notes (in a superb cover of Autumn Leaves) to real moments of joie de vivre in Rummel’s take on the Piaf classic, L’Accordeoniste’ HHHH Helen Tope, TheReviewsHub.com. ‘A fascinating show, comfortably paced and with the right amount of history, songs and personal anecdotes, it held my attention despite me being far from fully conversant in French’ HHHH Chris Omaweng, LondonTheatre1.com. www.stefanierummel.com www.chansons.show Trailer: https://vimeo.com/594145474 P